Rum which is a cult among surfers from all over the world.

Born in the West Coast in 1911, Norman Collins soon earned the nickname 'Jerry' after his father noticed a similar disposition between the young troublemaker and the irascible family donkey. At 19, he arrived in Chicago, where he began to perfect his subjects under the columns of State Street. Shortly thereafter he enlisted in the Great Lakes Naval Academy. Around the globe on schooners, Jerry crossed the seas of China and other remote ports. It was during his travels in the Far East that Jerry developed a real fixation for Asian culture, art and imagery. At the end of his time in the Navy, at the end of the 30s, Collins decided to settle in the then remote island of Oahu, Hawaii. From here, the beginning of everything: his small studio in Hotel Street, in the Chinatown district, would soon become the destination of millions of soldiers and sailors, generally used to living at most every 48-hour license to the port of Honolulu; and from then on, Norman Collins would only be known as Sailor Jerry. For the remaining 40 years, Sailor Jerry hosted in his stronghold military caravans, continuing to perfect his bold style, able to incorporate the colors of mid-century America and the sensitivity of the Asian lines. Convinced assertor of freedom of thought and incurable inventor of jokes, Jerry was a visionary innovator, spiritual father of many artists who would follow his path, struck by those subjects destined to resist over time. With the same spirit is produced Sailor Jerry Spiced, the rum inspired by the man and the artist created following the original recipe of his favorite mix: barrels selected in the Caribbean and the addition of four spices - cinnamon, clove, vanilla and ginger - plus an infusion of lime, for what has long been the cult product of all international underground subcultures. 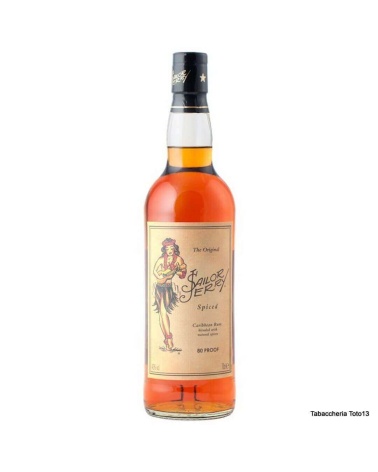