Famous and particularly appreciated by connoisseurs and lovers of the genre, the Monkey 47 is closely connected to the story of the one who was the commander of the Royal Air Force, Montgomery Collins, precisely better known as Monty Collins.

In the south-western area of ​​Germany, in a suggestive mountainous area between rivers and lakes of pure water, the distillery has been producing Monkey 47 since 2010, by the hand of the master distiller Christoph Keller, who has reinterpreted the inventor's original recipe in a modern key Monty Collins.

Famous and particularly appreciated by connoisseurs and lovers of the genre, the Monkey 47 is closely connected to the story of the one who was the commander of the Royal Air Force, Montgomery Collins, precisely better known as Monty Collins.

The latter, the son of a British diplomat and born in the English colony of Madras, India, was thanks to the fact that he lived for many years in the east that he began to know aromas and spices, many years later used to give life to the Monkey 47. Montgomery Collins, in fact, after the Second World War was sent to Berlin to deal with the reconstruction of the city, destroyed by bombing.

In the German capital, the commander made friends with a curious monkey from the Berlin zoo, which was renamed by Collins himself as "Max".

After leaving the Royal Air Force in 1951, Collins moved to the Black Forest, the Schwarzwald, and as a good British, not being able to give up his daily dose of Gin, he began to produce a distillate starting from all the most traditional ingredients of the Gin itself , and subsequently adding some natural elements of the Black Forest, as well as some of the spices he had known in the Indies during childhood.

The result was extraordinary, and in a short time Collins managed to develop a recipe that included 47 different elements.

With the death of Collins himself, however, his Gin was forgotten for several decades, until his recipe came back to light together with a bottle of the distillate itself, on the label of which a nice little monkey had been drawn by hand, above which it was possible to read the words "Max the Monkey" clearly.

Starting faithfully from Monty Collins's recipe, this is how today, thanks to the Black Forest Distillers, we can savor all the original taste of the 47 elements of what is now the famous Monkey 47, among the Gin certainly one of the best known and appreciated in Worldwide. 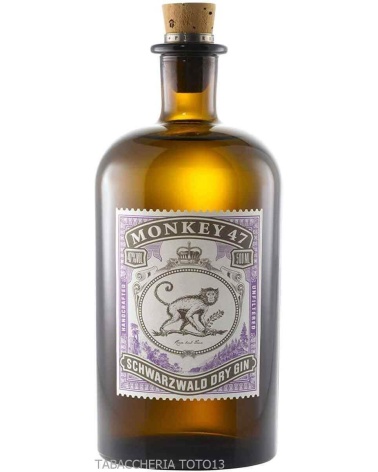